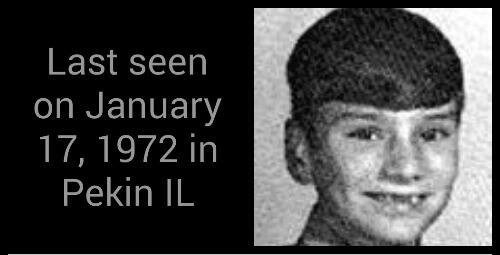 Dressed warmly for the winter weather in a gold-colored jacket, green rubber insulated boots, and a brown ski mask, 13 year old Richard William Griener left home for an afternoon of sledding on January 17, 1972. The boy headed toward a local park just four blocks from his house in Pekin, Illinois. He made it, for he joined some friends; however, the last time they saw him was around 5:30pm. Richard Griener was never seen again–alive or dead.

The entire area was searched multiple times, but zero evidence was found of Griener, not even the blue sled that he’d been carrying that day. At this point, experts believe he is dead, but the case is still considered active as they’re always looking for leads.

There was one lead–and only one lead–that was a plausible one. William “Freight Train” Guatney confessed to multiple murders of children during this time, including one that was kidnapped just 200 yards from where Griener was last seen. In the late 70s, fourteen children were found dead near various railroad switches and near towns with an ongoing or just-ended fair. Griener was never found, but he did have to cross a railroad switch to get back and forth from the sledding hill. Guatney, whose nickname came from his ability to mimic a train whistle, traveled by trains around the Midwest to make money helping out at state and county fairs. After his confession, he was found incompetent to stand trial and was committed to a mental institution, where he died.

Guatney may have been a lead, and Griener’s age was within Guatney’s preference, but there was one huge difference: the missing and murdered children attributed to Guatney all disappeared in the summer. Griener went missing in the winter.

If you have any information on this case, please contact the Pekin Police Department at 309-478-5300.