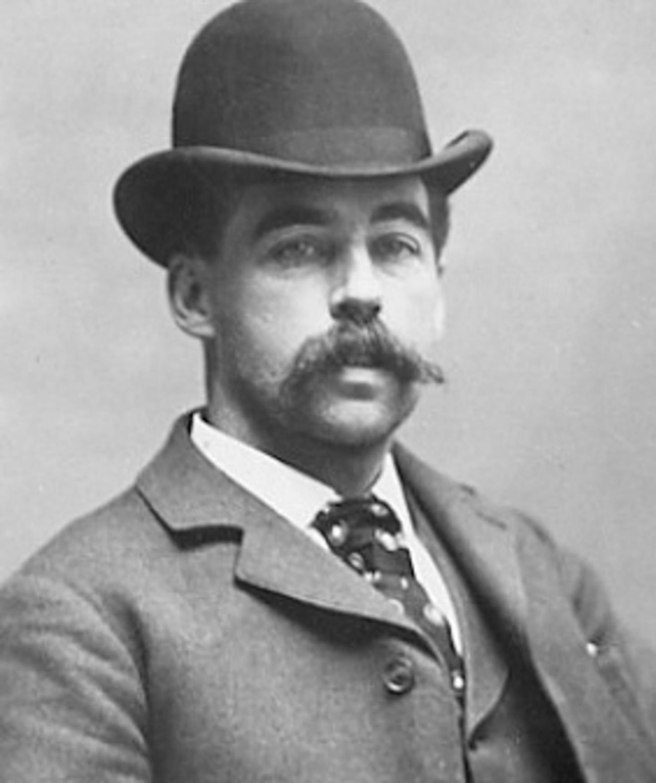 Who was H. H. Holmes? Many things. A physician. A brother. A master manipulator. Chicago’s first serial killer. The source of my unending curiosity for the past few years.

H. H. Holmes was born in Gilmanton, New Jersey, in 1861. Made infamous through Erik Larson’s non-fiction The Devil in the White City, Holmes has now been the feature of several documentaries and bus tours in Chicago that will take you by his killing grounds–including the former location of his Murder Castle.

Sound ominous? It should. The more I learn about him, the more intrigued/baffled I become. (So much so that I wrote a novel, published some short stories, and started this website and blog!)

Jeff Mudgett, Holmes’ great-great grandson and author of Bloodstains, was the driving force behind the History Channel’s American Ripper docuseries. One goal of the show was to determine if Holmes could have been London’s Jack the Ripper (there is documentation that he was in London at the time of the murders), and another was to determine if Holmes was actually the body in his grave. His really weird double-grave, encased in concrete. No, I’m not making this up.

In the end, the History Channel’s experts determined that the body in Holmes grave was a “conclusive link” to the real Holmes.

Jeff Mudgett disagrees, and I can’t say I blame him.

On a recent Facebook post, he outlines his reasons–based upon admissions of court-appointed anthropologists from the University of Pennsylvania:

Holmes was a mastermind when it came to life insurance scams, stealing bodies, killing people, forging dental records, etc. Let’s not forget he was a doctor who was intimately aware of the human body, as he often stole bodies and killed people to make articulated skeletons that he could then sell to universities. Is it such a leap to think he could have managed to fake his death?

If you too are morbidly interested in this man, check out the rest of my website and short stories. And  sign up for my email list. I have the H. H. Holmes Handbook coming out soon, and my subscribers will not only get a first look but get it for free!

The Murderous Mystery Tour is coming to take you away… (My apologies to Paul and John. I couldn’t help myself.)

If you’re simultaneously creeped out and fascinated by the likes of H.H. Holmes, take a trip to Chicago for two well-done tours of the good, er, bad doctor’s stomping grounds.

Weird Chicago’s bus tour takes you “on a journey back in time to not only the places where Holmes sought out and dispatched his victims, but also to take a look at the remnants of the spectacular fair” of 1893. I went on this tour in the summer of 2017, and it was phenomenal–and one of the reasons I began writing The Devil Inside Me. The tour guide was super animated and knowledgeable about all things Holmes. At the time I’m writing this, tickets are $35. Weird Chicago has other tours as well, including the Roaring 20s Speakeasy Tour (21 and up only!) and the Blood, Guns, and Valentine’s Tour.

Adam Selzer, author of H.H. Holmes: The True History of the White City Devil, runs a walking tour in the Windy City. Selzer’s tour differs from Weird Chicago’s in that he focuses on the not-so-known locations that Holmes would have visited. I took this tour in the fall of 2017, and it too was phenomenal. Selzer is not theatrical as the other tour’s guide was; rather, he provides the details of Holmes’ life that often get lost in the legend–and he distinguishes fact from the fiction that history tends to create. Tickets are currently $20 (for his other tours as well). Selzer runs the Mysterious Chicago podcast and website, and he was a consulting producer on the History channel’s series about Holmes, American Ripper.

If you’re in the Windy City, you don’t want to miss these tours. Let me know what your experiences are!